Absolut Raspberri Vodka is rich and intense with the fresh and fruity taste of ripened raspberries harvested in the Swedish hillsides. Absolut Raspberri is made exclusively from natural ingredients, and unlike some other flavoured vodkas, it doesn’t contain any added sugar making it perfect for mixing. The main ingredients in Absolut Raspberri are Absolut Vodka and raspberry flavour.

Absolut Vodka has completely redefined the premium vodka landscape, becoming synonymous with art, culture and nightlife. By starting a revolution in cocktail creation and launching a range of flavours never before seen on the market, Absolut has become an icon in its own right. It has been produced at the famous old distilleries near Ahus in accordance with more than 400 years of Swedish tradition. In 1879, Lars Olsson Smith, its founder, introduced the continuous distillation with which he made Absolut. Instead of the usual three or four times, the vodka was distilled an infinite number of times. At Absolut, not only do we source all the ingredients locally, we have also made our distillery one of the most energy-efficient in the world. Today, Absolut has a CO2 neutral distillation.

Absolut Vodka is the leading brand of Premium vodka offering the true taste of vodka in original or your favourite flavors made from natural ingredients.The Iconic Vodka Crafted From Swedish Winter Wheat. Perfect For Cocktails & Mixed Drinks. 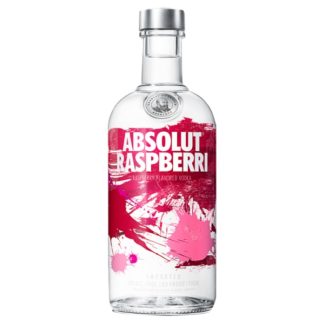 You're viewing: Absolut Raspberri Flavoured Vodka 70cl £20.69
Add to basket
NOTE: We Are Currently Changing Warehouse. As A Result There May Be A Delay In Dispatching Orders.
+